I have high hopes for this new animated series. I know I probably shouldn't, because modern Pokémon is not what it used to be. And yet I still hope. Tragically, it seems to be a once-off TV special only with just 4 episodes.

From this preview trailer, I'm somewhat confounded by the new art style. Is that Brock? By Arceus, he's like a completely different character now. And did Red always have such an unimaginative hairstyle? But I've spent the last 15 years watching the original Pokémon series. I think I need more adjustment time.
This new series looks like it's more closely based off the old R/B games, in which the main playable character was Red. It appears that he's chosen Charmander as his first Pokémon, which eventually evolves into Charizard.
I am assuming this means that his rival (Blue) will be facing him with Blastoise, much like in the original Pokémon anime. Except in this version, Blue is actually Green due to the original title of the Japanese game. 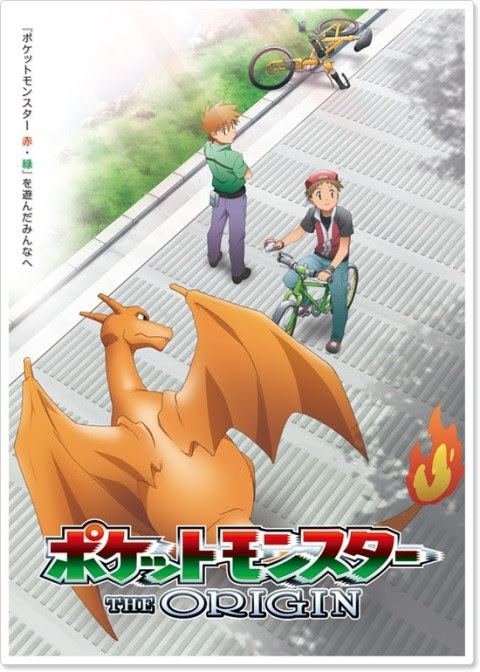 The animated style here distinctly reminds me of the artwork for FireRed and LeafGreen. It isn't childish like the original series. I anticipate that this hints towards an older target audience, which would mean more serious character development and less comical repetition.

Pokémon: Origins will be aired on the 2nd of October, 2013. I will be following this closely, especially after English subtitles are made available. This new series is a bigger deal to me than Generation 6, and with luck my enthusiasm will not have been in vain this time!

***
The Japanese version of The Origin with English subtitles is now available:

Pokémon: Origins is very well animated and a cut above the original anime. Unfortunately, what lets it down terribly is the lack of time needed to 'flesh out' the story. They didn't bother to properly animate the 8 gym battles, and even skipped over the Elite Four and most of the final battle with Green.

Much of Origins focuses on either Red growing stronger or various lead-ins towards Mega Evolution. In the final episode, Red is virtually powerless against Mewtwo until Charizard transforms into the Mega X form. This gives the impression that Origins was put together with the sole hope of promoting the new Mega Evolutions to older generation fans of the franchise.

Red's personality is also depicted as being very similar to most typical anime protagonists (such as the original Ash or Naruto). He seems to know very little about Pokémon training from the beginning, even going so far as trying to steal another trainer's Nidoran. Red even questions the opposing trainer after he explains that stealing Pokémon is frowned upon! I was expecting Red's character to be much deeper and sharper than Origin's very predictable interpretation of him.

Overall, Origins offers a good alternative for fans of the original generation Pokémon games. It was clearly made with high production values, which is evident in the vibrant animation, the voice acting, and the new music compositions. I can only dream of how epic this new series could have been if only it had been given the chance to extend Red's journey to full length.

1. Charizard punching Blastoise in the face.