My verdict has finally arrived on some of the products I ordered earlier in the year. Instead of the usual cosmetic makeup used to cover up flaws, this year I tried out some more natural beauty enhancement products.
I mostly invested in eyelash growth serum, finishing powder compacts and staple facial cleansers. You can probably guess by the varied review lengths that I have tested some items more than others. 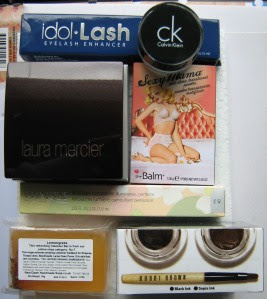 Depending on what you are looking for, you can buy a decent range of brand name cosmetics here. They also offer loyalty discounts and sample gifts, all on top of free shipping. StrawberryNet ships from Hong Kong, and I received my order in around 4 working days, delivered to Australia.
Some of you may be suspicious of possible counterfeit products, but I can assure you that at least with my purchases, everything was factory sealed and genuine. Hong Kong is a major business district, and in my experience it is a far more reliable place to buy branded imports from than the rest of China. However, some reviewers claim that they were sent cheaper replica products.
~~~
Idol Lash 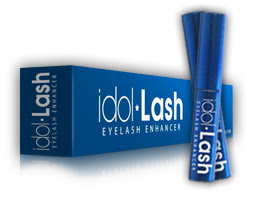 My interest piqued by the desirable effect of Vaseline on the lashline, I noticed an advertisement in the Sunday newspaper for lash growth serum.
Researching further into this product, the two growth serums I ended up focusing on were Cprx Lash Prescription and Idol Lash, which are both backed by good online reviews and proof via clinical trials.
Seeing how the Cprx formula was AUD $69.95 (RRP) for 2ml, and Idol Lash was AUD $49.95 (RRP) for 5ml, I decided to give the cheaper option a test run.

I used Idol Lash on and off for several weeks. It's a clear serum that you apply with a thin brush to the upper lashline or lower lashline. You can also use it on sparse areas of your eyebrows. The serum did not irritate my eyes or cause any side effects. In a few instances, you might actually get it in your eye, and this caused me some temporary pinkness. It was nothing shocking or severe, just a slight pink tinted area which disappeared quickly. I also found that applying Idol Lash seemed to make me yawn more, leading to watery eyes and possible washing out of the product.

Idol Lash does work, at the very least with increasing existing lash length. I noticed a few millimetres of extra lash growth after only a few nights of application. The serum seems to encourage new lash growth as well, but don't expect caterpillars over your eyes overnight.

If you already have a full set of eyelashes, the growth serum effect would probably be much more noticeable. But if you don't have naturally thick or plentiful lashes, I wouldn't expect a miracle. Tightlining your eyes can also make your problem a lot less obvious.
~~~
Laura Mercier – Shine Control Powder (Matte) 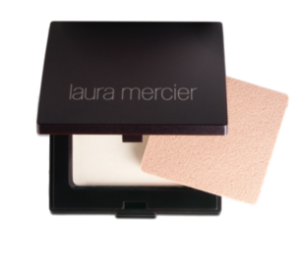 I wasn’t going to mention this here, but now I feel obligated.
This pressed powder compact is awesome. It does everything that the product description claims, and does it exceptionally well. There was no other powder which could contain my shine-prone face before it, and now that I have discovered Laura Mercier’s shine control compact, I am going to stick with it for all eternity.
The slight mint green tint combats redness, the powder itself is magically fine, and the sponge applicator presses the product on perfectly to nullify all your oily shine instantly. Even on sweltering summer days, a few touch ups with this compact refreshes my complexion immediately. I refuse to venture outside without it. Yes, it is that valuable to me.
~~~~~
Elemis

A friend introduced me to this brand name by showering me with free samples. After taking a trip to their skin lab at Myer, I went home and trialled some of their products. Overall, I was quite impressed with how gentle and targeted they were.
The skin lab results showed that I had a ridiculous amount of bacteria residing on my face, but that’s not really too surprising considering how I had been lying around in flu infested bedding for several days beforehand. The main problem with my skin is excess oil production, and I was told that the answer was that I needed to moisturise. Apparently, having dry skin means that the skin tries to equilibrate by spurting out copious amounts of oily shine. Makes sense.
Soothing Chamomile Cleanser

I am crediting this cleanser for clearing up my skin, since I’m not very thorough with removing daily cosmetics and don’t really use any other staple products. It’s very light and natural, cleans up dirt and stops me waking up in the morning with an oil slick on my forehead.
Soothing Apricot Toner

The recommended product to apply after the Chamomile Cleanser. I’m sure it’s doing me good, although I can’t see any obvious improvements. It’s as equally calming as the cleanser, and ‘soothing’ just like the label clearly specifies.
Daily Shine Control

This product works better than most other anti-shine creams I have used. But not on hot days. In fact, it appears to do next to nothing on hot days. I don't really blame it, though.
~~~~~
New Dawn Handmade Soaps 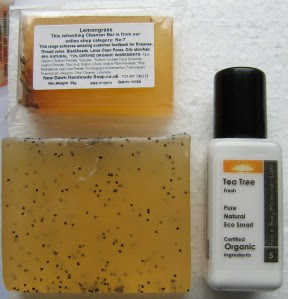 The first organic facial product on the agenda is this Tea Tree & Poppy Seed soap. It was created to combat milia, which are small, milky coloured oil spots.
At this point I should mention that I’m not that badly affected by milia. I only have two or three very small dots under my eyes, so I don’t think I even have a moderate case, but I really needed an excuse to order some organic facial samples. :P
At first glance, you can tell that this bar of soap is handmade with high quality ingredients. But does it get rid of milia? Well, for me… no. It didn’t seem to have any effect on those five white dots I had. The soap did seem to reduce oil and breakouts, but it should be noted that I didn’t use it religiously.
I’ll tell you what did shrink the milia spots though. I drank a lot more water than usual from a chilled office drink tap, and overdosed on complimentary seedless mandarins. Now I can hardly even see those milky dots.
Tea Tree Oil Moisturiser
This product would be useful for those with moderate to severe acne. It smells strongly of tea tree oil (obviously), which resembles the scent of crushed eucalyptus leaves. My skin is probably not affected by acne enough to see any significant results with this one.
~~~~~
The Body Shop

Okay, so I only poked my fingers into some samples while I was there. These three body butters were my top picks, judging by their high degrees of luxurious scent.
***
Perfume Sampling 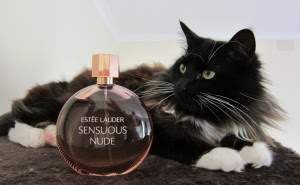 Ah, the perfume section of Myer. What better way is there to spend your free afternoon in the city centre? Oh, right. I forgot about gawking at the bunnies and kitties at the pet store for a second there.
For those of you who are curious, have some image evidence of those aforementioned fuzzy little kittens:

~~~
Getting back to sniffing bottles and cardboard all day at the perfume department, here are my personal top three fragrances.
1.  Estee Lauder: Sensuous Nude 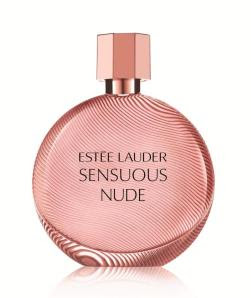 There is just something about this scent. It’s not as one dimensional as plain vanilla, but a unique amalgam of what appears to be coconut water, mandarin and pepper. I would have never imagined the smell of pepper adding anything positive to a fragrance, but here it adds an indescribable ‘kick’ at the end of this otherwise sweet smelling series of notes.
You really have to take a few whiffs of Sensuous Nude to comprehend it. Oddly enough, this fragrance had a different smell on my second visit to the store, and I spent the next hour trying to find the original scent. It turned out that the display bottle was giving off a different smell for some reason, despite still being Sensuous Nude. A quick spray of a different display bottle ended my fruitless search.
2. Ralph Lauren

This fragrance has been my default scent since mid-high school. Actually, a cheaper imitation version was… because I spent most of my money on card games. Stitch No. 22 was priced at a measly AUD $10 for 50 ml, and was much easier to get a hold of. I haven’t decided whether to invest in the real deal or not, considering how I’ve now discovered a fragrance I prefer more. I probably won’t due to the high price tag. But that’s not to say Ralph Lauren isn’t an amazing fragrance.
To this day, I have no idea how to adequately describe what this perfume smells like. The best I can come up with at the moment is ‘some sort of flowering citrus fruit’. It just smells like something that dropped from a tropical heaven in the clouds, yet also seems very suitable for everyday wear.
3. Nina Ricci

Although the third place fragrance pales in comparison to the first two major perfumes, I am mentioning this one as my pick for those who prefer a fruity scent.
As the bottle suggests, Nina Ricci smells like apple. But not just regular apple, the sacrilegious kind that you can only find growing in the Garden of Eden. I don’t think this perfume has a specific name, so I’ve just been referring to it as ‘that godly fruit one’. Remember kids, fruitiness is next to godliness.
~~~
The perfume counter staff have advised us that the best way to pick out a scent is to first go through and snub all the labels you hate. This allows you to quickly discard all the fragrances with similar unflattering notes in them, without having to destroy your sense of smell by blind experimentation.
For me, I really couldn’t stand the smell of White Linen. I wasn’t that much into floral scents, either. Eventually I arrived at the conclusion that all I really wanted was to smell like a sugar-coated dessert. Vanilla and coconut, to be precise. (This is very ironic, considering that I don’t particularly like the taste of either. Seems like they just produce a nice aroma.)
After this epiphany point, you are set to bombard your senses with potentially attractive smells until you hit one which compels you to stuff your bag full of complimentary sniff cards.
Voilà! You have now found your signature scent, and won’t need to embark on a similar aroma journey until you grow tired of it. For me, I’m hoping the next intensive perfume search won’t be for another several years.
~~~
In Summary of Perfume Hunting

I started off somewhat enthusiastic about sampling so many different perty bottles. Unfortunately, after an hour of continuously inhaling fragrance fumes, my head began spinning with the impossible burden of processing all of them. Even after ‘clearing’ your sense of smell by breathing into a vial of coffee beans, you simply can’t spend an entire day sampling perfumes without becoming physically ill.
It would be a good idea to do some brief online research on which scents you might be seeking before you hit the stores. This not only saves time, but also gives you a realistic estimate on the cheapest price ranges available.
My final piece of advice is to adequately prepare yourself before venturing into the perfume department of any retailer. You have been warned.